The Days of the Greyfort Races 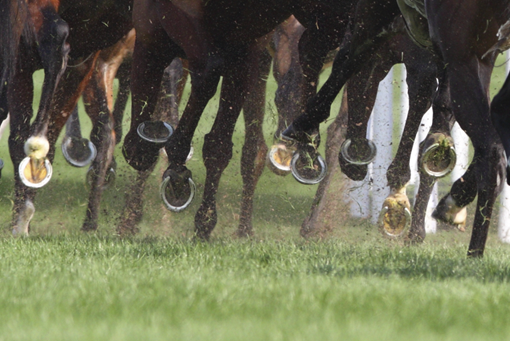 Jack ‘John’ McGloin was born in Greyfort House, Currower, Attymass in 1889 and he died there on 31 October, 1968. Attymass is located in the Balllina District of north Mayo in the west and is a very scenic area with numerous lakes and the Ox Mountains, making it an attractive area with great tourism potential.

Greyfort House is located in the centre of this panoramic landscape and was the big house for an extensive estate that was the focus of agrarian unrest during the turbulent years of 1921 and 1922. This would continue on into the following years also as the people wanted the lands to be striped among them for arable use and for cattle rearing.

Joseph McGloin married the former landlord’s daughter Mary Irwin. She belonged to the landlord class that had been in the house since before the Great Famine and into the 1880s. John Irwin was a landlord there in 1874 and is recorded in ‘The Landowners of Ireland’ that year. William Irwin was the last of the Irwin line in Greyfort. Greyfort House had been inhabited since the early decades of the nineteenth century.

The McGloin family hosted the Greyfort Races in the opening decades of the 1900s, circa 1909 to 1912, and the last race meeting at the house and its extensive lands was held in April 1912, according to local folklore sources. There was a race meeting held there on the 29 April, 1909 and this event was advertised in the ‘Irish Independent’ and the ‘Western People’. The race meeting was a major event for the social calendar.

The Greyfort Races were an elaborate affair because they were a social event for the great and good and all those with an interest in the racing game – they were held in an era when people and landlords got on fairly well.

There were five races held on the day starting at 1.00pm and ending with the final race at 4.00pm. These were the Ballina Plate, the Commercial Plate, the Currower Stakes, the Lough Brohly Stakes and the Consolation Plate, which was specially held for the runners and horses who had not won a race during the day’s meet. There was a first prize of £10 for the Ballina Plate and a second prize of £2 for the runner-up. The first prize for the Commercial Plate was £5 and the Lough Brohly Stake was £4 and then the Consolation Plate was £4 too, and there was a runner-up prize of 15s for the second place in each of the races. The races were held over a distance of 2 – 2.5 miles and they were run over an excellent grass course. The entries for the 29 April,1909 had to be with the Honorary Secretary, Tony Durkan, by the 26 April, 1909 and there was a general entry fee for all races of 7s 6d and there were separate entry fees too: 5s for the Ballina Plate, 2s 6d for the other four races.

Paddy Darcy was a wonderful folklorist and local historian and he told many stories from bygone days and one of them was about the races that were held at Greyfort and the account was included in the Bofield Centenary book ‘The Academy at the Crossroads’, which was published in August 1996. Paddy told me that the last race was held in April 1912 and that it was a grand affair attended by the leading families in Ballina, including the Sweeney’s and Callaghan’s both families who had horses. Tony Durkan won the last race and one horse careered off the course – the name of the horse was Lough Brohly Lad who was owned by Pat Gilmartin and Jim Kerrigan. There was a marquee and tea and scones and toast cakes as well as various entertainments for young and old. Such was the social life of the time.

Around that time there was a football match between Attymass and Bonniconlon and the final score was Attymass 0-1 Bonniconlon 0-0. The game was played in January 1907 and the referee was F. McCann. Heady times they were indeed!