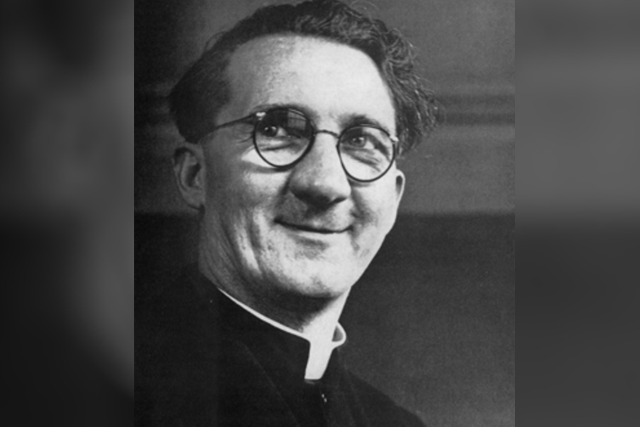 Monsignor Hugh O’Flaherty must surely be one of the most inspiring figures of World War II. From his privileged position in the Vatican, Monsignor O’Flaherty gave his services and saved 4,000 allied prisoners and Jews from capture by the German SS.
Hugh O’Flaherty, the eldest of four children, was born in Boherbue, Co. Cork.

A keen sportsman, he enjoyed hurling, basketball and handball, and was mad on golf. When he died in 1963, the largest daily paper – ‘The New York Times’ – highlighted his death on page one – The Pimpernel is Dead.

It was hardly surprising that Monsignor O’Flaherty should be thus honoured. With a ransom of $50,000 dollars on his head, he saved the lives of over 4,000 people while working within the Vatican as a notary of the Holy Office.

In 1945, he was awarded the CBE in recognition of his services to the British Forces in Italy. When asked how he, an Irishman, with no allegiance to the crown, to put it mildly, could save the lives of British soldiers, he replied: “God has no country”.

Father O’Flaherty attended the Monastery school in Killarney. It was surprising that in his boyhood he developed a keen love of golf, considering that it was hardly the sport of the ordinary man in the street at the time. He became amateur golf champion of Italy. He played golf with Mussolini’s son in law, Count Ciano, and with ex-king Umberto of Spain.

After finishing school, Monsignor O’Flaherty taught for three years before deciding to become a priest. He was ordained in Rome on November 20, 1925. He was originally ordained for South Africa but never got there. Presumably the authorities realised that it was foolish putting a cart horse jumping fences!

Already Father O’Flaherty’s skill as a diplomat was being realised. He served in Egypt, San Domingo and Czechoslovakia before being called to Rome and appointed to the Holy Office.

His mother and sister visited Rome and stayed at the Vatican many times. Father O’Flaherty also played host to Mr. de Valera on his visit to Rome and was in charge of the visit of the then Princess Elizabeth.

When the German army occupied Rome in September 1943, the Gestapo was commanded by a young colonel – Herbert Kappler.

Although the war was getting more horrible – Jews were being sent to Auschwitz, prisoners tortured and murdered, – Monsignor O’Flaherty was living in a house for German speaking priests, the Collegio Teutonico. The house was taken care of by German nuns. Ireland being a neutral state, nobody objected to this arrangement.

This, in fact, was an ideal headquarters for Monsignor O’Flaherty’s main work of helping Jews and Allied POWs to escape arrest, torture and death. Nor did Monsignor O’Flaherty have the immunity of the Vatican to protect him. His work involved frequent trips outside the Vatican. He would risk his life on the steps of St Peter’s waiting for those in trouble to come to him.

His quarters in the German College became the clearing centre for escapees, fixing them up with money, clothes and lodgings financed from his own pocket and with money he collected from the nobility.

Colonel Kappler gave top priority to wiping out Monsignor O’Flaherty’s network but the priest seemed as elusive as the fictitious Scarlet Pimpernel! An attempt to assassinate him on the steps of St. Peter’s failed.

The ending of the saga between these two colourful characters – Monsignor O’Flaherty on the one hand and Kappler on the other – reads like a fairytale. Truth is indeed stranger than fiction.

The year after, the Monsignor suffered a stroke and returned to Ireland to Caherciveen. He recovered and spent nine months on parish duty in California. His health deteriorated and he was forced to return to Ireland once more, where he lived a quiet uneventful life until his death.

Two books have been written about his wartime activities – ‘The Pimpernel and the Vatican’, and ‘The Story of Father O’Flaherty’. A film was made about him in 1983, – ‘The Scarlet and the Black’ starring Gregory Peck.