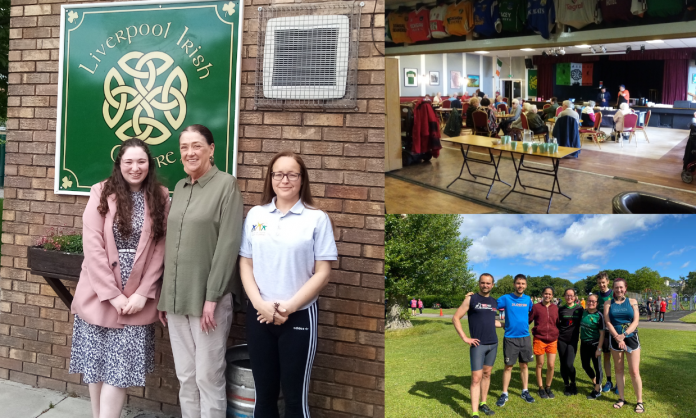 The Liverpool Irish Centre is a vibrant community and social hub at the heart of the Irish community on Merseyside that continues to thrive. When the centre was established in 1964 at a city-centre site in Mount Pleasant, adjacent to where the Metropolitan Cathedral of Christ the King was being constructed, it had the explicit aim of being “a spiritual home for Irish people in and around Liverpool”, and a centre in the true sense of the word which would strive to keep the Irish culture alive in Liverpool by promoting Irish traditions, songs, dance, music, goods and sports. Initially serving first and second generation Irish, since then its mission has broadened to include reaching out to later generations born in Merseyside.

For over thirty years the centre on Mount Pleasant was home to live music, dance classes, social events, meetings of Irish clubs and societies, wedding receptions, family occasions, and many memorable nights of music and song. In the 1990’s the large listed building at Mount Pleasant was becoming nonviable however, and a new centre ‘St Michael’s Irish Centre’ was established in 1999 at the premises of the former parish centre adjacent to St Michael’s Church on Boundary Lane. Renamed as Liverpool Irish Centre in 2017, it continues to be the focal point of Irish culture on Merseyside and the second home for members of the Irish community, diaspora, and those living away from the Emerald Isle.

The weekly activities at the centre include Comhaltas music classes, Irish dance classes, Irish language classes with Conradh na Gaeilge, Coffee mornings, Lunch Club, Afternoon Tea Dances and Bingo. There is also a regular entertainment schedule each Friday, Saturday and Sunday with concerts, quizzes, folk and comedy nights, as well as a monthly Supper Ceilí, regular pop up Gaeltachts and traditions such as the annual St Patrick’s Day Mass and Crib Sunday.

The centre also has an Irish shop, packed with all the best food produce from Ireland and during the Covid-19 lockdown work was completed on developing the garden and a new Men’s Shed which Minister Simon Coveney officially opened in October 2021.

The Centre also works closely with Liverpool Irish Festival, which takes place every October and through a ten day programme of arts and cultural events including storytelling, theatre, céilís, music, talks, literature, heritage and film aims to bring Liverpool and Ireland closer together by recognising and celebrating Irish creativity as a visible feature of the city.

Welfare support has always been a key element of the centre’s work, and this led to the establishment of an independent charity, ‘Irish Community Care’, to operate in tandem with the centre, offering support, information and guidance to Irish and Irish Gypsy and Traveller communities in Liverpool and across the North West of England. In recent times the centre’s remit has been further extended to promote mental health awareness and wellbeing through the Sláinte le Chéile project (‘Health Together’ in Irish) that has been running for the last 6 years.

Clodagh Dunne, Project Co-ordinator spoke to Ireland’s Eye about how the project came about:
“We were originally funded by the NHS Liverpool Clinical Commissioning Group to form a health and wellbeing group that serves Irish and Irish Traveller communities in Liverpool. We were lucky enough to be funded for 2 years and I came onto the project as the Project Lead so my job is to deliver, implement and consult with all the Irish communities in Liverpool. We started off with a gardening group and a walking group and it has grown massively over the past six years. We have been funded by the Irish government and the National Lottery Community Fund, all of which means that Irish and Irish Traveller communities in Liverpool can access health and wellbeing activities at the Irish Centre.”

Clodagh went on to outline some of these activities and to describe how the project has made a positive impact among the Irish in Liverpool. “At the minute we have about nine weekly activities that run. We’ve also formed Liverpool Irish Rovers running group, which we have about 60 members, and these activities all began by consulting with the people that I work with. It’s basically putting in place initiatives that help improve people’s mental and physical health, and throughout the 6 years and due to Covid we’ve seen that people need more activities to help with stress and to give people coping mechanisms.

“As the years have gone on the project has gone from strength to strength; we have put in place Mindfulness sessions, Cognitive Behavioural Therapy sessions, and we work a lot in partnership with many local community group all over Liverpool. We have a wonderful working relationship with Homebaked Anfield who provide food to any of our events and activities. We have a direct referral pathway process also with Irish Community Care so that anyone who really is marginalised and the hard to reach groups can be supported – so Irish Community Care is a great working partnership and because of them we are then able to reach more people.“

It is estimated that 75% of the population of Liverpool have Irish connections, and Clodagh remarked that the Irish centre is an “invaluable hub” for the Irish communities in the city. When people attend the centre “they are taken back to being at home” she stated. The centre was kept was kept open during the Covid-19 lockdown and “it was a lifeline, we did frontline work”, she said. According to Clodagh it was during the lockdown, that “it was realised how much support was needed in the Irish and Irish Traveller communities especially for people who were isolated or living alone.”

The centre, partnered with Irish Community Care, the Liverpool branch of Comhaltas Ceoltóirí Éireann, the local Gaelic football teams John Mitchels and Wolfe Tones and other community groups to set up CARA: Irish Communities Together, a project in which volunteers reached out to those who needed a helping hand and a listening ear during those most challenging days of the pandemic.
Clodagh explained that the objective of the project was “to provide emotional and practical support to anyone who was living alone and who had to isolate for their health”, keeping all those who were vulnerable safe, well and connected.

This support included shopping for groceries, prescription collections and befriending calls, and just being there for people to have a friendly chat over the phone. Clodagh added “What we did find out sadly was that a lot of older men who had left Ireland years ago and who had never married and were living on their own, they were a core group of people who really needed our support so we reached out to them and thankfully we were able to reach hundreds and hundreds of people.”
This project has left a positive legacy after the lockdown as well with more and more older people now attending some of the centre’s regular activities such as the tea dances and the ceilís. “They want to keep connected with others and maintain that social contact,” remarked Clodagh, who added that “social connection is so important for people”.

Seeking to serve the community and offer a meeting place and activities which help people reconnect to their Irish culture and heritage remains an important focus of the Liverpool Irish Centre today, fifty-eight years after the centre was established. “It’s great to see everyone enjoying the Irish centre whether they’re Irish or not,” commented Clodagh. “You don’t have to be Irish to enjoy the centre, everybody is welcome here. There’s something for everyone and if some do find it hard to settle into Liverpool then I think it’s so important just to call in,” she said in conclusion.

Liverpool Irish Centre is located at 6 Boundary Lane, Liverpool L6 5JG. For more information and to sign up to the centre’s newsletter see www.liverpoolirishcentre.org

You may have missed...

Gregory Peck – one of the greatest Hollywood stars

Monarchs and their problems