Horse Doctors – The old and the new 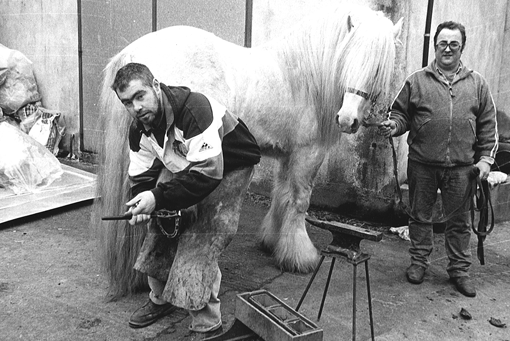 Stephen Croghan has spent his life as a blacksmith and farrier. The very mention of the words brings a smile to his face, a certain wistful look in his eyes. As he speaks there comes forth a deep sense of pride, satisfaction and most of all passion for the work he did. A thin stature of a man he holds his Major cigarette in the hands that once toiled in his forge in Goff Street, Roscommon.

Ten generations of his family were blacksmiths and farriers. His grandfather had seven brothers, six were blacksmiths and one a coachsmith. Two of Stephen’s uncles emigrated to America and one of them, Patrick, won the championship of America as a farrier. His granduncle had racing stables in Rhode Island and he had the farrier contract for all the dairy horses. He employed men at his depot and operated a mobile forge going to various ranches.

Nowadays, most seven year olds are riding a mountain bike or checking out a new computer. At seven years old Stephen put his first shoe on a donkey. All through his young years he watched and learned from his father. His father was farrier to Lord Crofton, Moate Park estate and he looked after all the hunting horses around Roscommon. 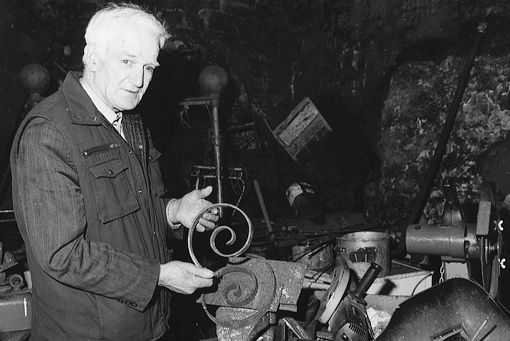 “John Neilan, Stonepark had about thirty six horses and there was a point-to-point racecourse there. Austin O’Malley was a famous horse trainer. He shoed horses for Mulligans of the Walk, who had racing stables and they owned Lenabane racecourse. My grandfather was farrier to Lenabane for forty years and I was in the same capacity myself for over thirty years,” he explained.

Shoeing horses was not the only task carried out in the 22ft. wide x 200ft. long forge. The Croghan men used their creative skill and workmanship to produce bars and points for ploughs, points for wooden barrows, loys (the first spades) and slains for turf cutting. Forks, chisels, punches were made and supplied to stonecutters.

Any ironwork required in the building trade at that time was made by them. There was no supplier of raw materials, and you had to make shoes out of anything you could get hold of. As there were no tools on the market they too were shaped and moulded and produced in the forge – hammers, knives, tongs. His father built what was called the “box” pony and trap and they made axles for cars and rims for the wheels. “You had to manufacture anything you or anybody else needed” he stressed. Stephen did not have an opportunity to train in any special way for his job.

At the age of 13 he went to the technical school where he studied commerce, wood-work, agricultural science. At that time there were no engineering classes. After school he worked with the agricultural instructor in the garden and at night helped his father rasping off the horses hooves, blowing the bellows and sledging. I loved creating something in iron. I liked to see the finished job.” He loved work, never complaining of the long hours. He chuckles at the present 5-day week with tea and lunch breaks and recalls: “My father told me that at eleven years he was sent to a fully qualified farrier, Coote in Carraroe. His day started at the break of dawn. A man, a sledger, was taken off the land and between them they shoed 15 or 16 horses that day and also made some ironwork.

They quit at dusk when there was no more light to work with. His day’s pay was 7s. 6d and the sledger got 2d.” Stephen describes the apprenticeship of a blacksmith and farrier in the old days: “When you went to serve your time the first job you got was making the nails and nailers anvil. The anvil would be fitted into a wooden block and a solid block of steel. You would then make the tools – tongs, pincers and then leaving down the clinches.

The farrier would be shoeing and you would be watching. Then you would pair the hoof and level it off. The shoes would then be fitted and you learned how to nail them. As time went on you learned how to make special shoes for the different faults in the horse – a fetheredge shoe for one with feet too close together or ‘brushing’, a diamond toe shoe for one who was hitting his hind legs against his front ones, a side-bone shoe which was a specialised job – rounded toe, wider and thicker on the inside, flatter on the outside. If a horse didn’t have movement in the norvicular bone, you had to make a rocking shoe for him or he would fall forward onto his head”.

Stephen is a great talker, something he did daily in his forge. Down through the years it became a meeting place where townsfolk, farmers, horseowners and countryfolk mingled and exchanged news. “You didn’t need a newspaper, you got news from all over the country,” he remarked. Stephen’s sons will not be carrying on in the trade and so the forge will be passed on to them and used for some other purpose. The steel doors are locked, no sound of hoofs or the gathering of people. There is an aura of silence, finality and the end of an era but Stephen, blacksmith/farrier imparts an air of quiet contentment, his toil-worn hands no longer rasping. They lay easily on the side of his comfortable armchair.

Meanwhile in Valeview, Lisalway, Castlerea, a young man in his twenties, Sean Raftery wanted to become a farrier at the age of fifteen. Due to the collapse of Bord Na gCapaill in the 1980s there remained no training establishment and so Sean went to the Curragh for two years to learn from an old experienced blacksmith. While there he trained horses as well as learning the skills of a farrier. He returned home and worked with John Duffy of Frenchpark. When John was tragically killed in a road accident Sean decided to set up on his own. He works from home and also travels all over the country to Galway, Mayo and Sligo.

He describes the present day method of shoeing: “I buy the shoes in bulk from farrier suppliers in Wicklow. They come ready made but sometimes they have to be altered. I put them on cold so I carry all the tools I need in my van and carry a stock of various shoe sizes”.

“Cold Shoeing” varies from the old method – the old blacksmith had to make a shoe, get it red hot and burn it on to the foot. Those shoes would be made from bits of iron and would be very rough. The new shoes are machine made and after rasping will be a perfect fit”. All the tools for the job have to be imported, rasps from Spain, diamond pincers from America and hammers from Holland. The horse shoes are manufactured in Cheshire, England and some are being imported from France and as far afield as Indonesia.

Sean worked for Francis Flood, one of the top trainers in the country, also with Frank Berry, who was ten times champion jockey and Conor O’Dwyer, “one of the best jockeys in the British Isles”. He has shoed “Montillado”, the well known local horse owned by Donal O’Rourke, on many occasions. Sean says there are only about three farriers in the county and because of this there is an abundance of work. He prepares horses for various events. A considerable amount of his work involves getting horses ready for horse sales throughout the country mostly Goffs and Tatterstalls. He shoes trotting horses, show jumping ponies for show jumping meetings, for race meetings, Ballinasloe fair, Castlerea mart.

He talks about the need to understand and take care of a horse: “The older generation had great feeling for a horse. The younger generation have not been brought up in the same way and instead of coaxing them they are inclined to beat them. I can see this when I am doing the shoeing, if I make a movement they are on edge, nervous as they think they are going to get a slap.”

The task of shoeing is easy compared to the old days. “You buy the shoe ready made in different sizes, trim off the hoof, cut off overgrown hoof, dress it up, shape the shoe to fit exactly and nail it on, turn down the clinches and rasp off the hoof,” he explained.
Sean says the best part of his job is shoeing thoroughbreds. “I have a great interest in thoroughbred horses and when I come across a very well bred foal or yearling who has foot problems and I straighten them, I find this very rewarding.” Sean is very optimistic about the future: “There will always be horses and with the improvement in roads and transport you can go anywhere.” He has one ambition, to own one of those sophisticated machines for making shoes that he saw on his last trip to America.