Hearse and Rehearse – The origin of the word ‘hearse’ 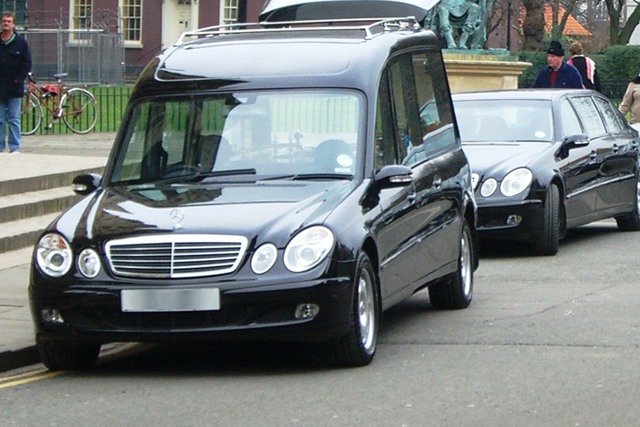 I was recently at a funeral in Kerry. The deceased was an elderly woman who hadn’t ever married. I can’t vouch for the veracity of the following but one of the mourners told me she requested no male pallbearers. In her handwritten instructions for her memorial service, she wrote, “They wouldn’t take me out while I was alive, I don’t want them to take me out when I’m dead.”

I don’t know if that is fact or fiction but . . .the undertaker did leave the keys in the ignition of the hearse outside the funeral parlour. A couple of “under-nines” were playing in the vicinity and when the coffin was placed in the hearse the keys were missing and could not be found.

While we were waiting for a replacement to arrive from Tralee a Kilgarvan, man said to me: “You could write a play about this.” I expressed a hope that he didn’t expect me to write a drama on the subject and he let me know that he meant that a play could be written about it.

Being in the heart of amateur drama country when plays were mentioned we were soon talking about rehearsals. “Speaking about rehearsals and hearses,” says the Kilgarvan man, “Do you know where the word hearse and rehearse come from?” When I answered in the negative he went on, “It comes from Middle English: from Anglo-Norman French hence ‘harrow, frame’, from Latin hirpex ‘a kind of large rake.”

The earliest record of the word in English in the sense that we know it meant the latticework canopy placed over the coffin (whilst in church) of a distinguished person,  and it probably arose from the late Middle English sense ‘triangular frame (shaped like the ancient harrow) for carrying candles at certain services’.

The word, originally spelled herse, comes from the Latin hirpicem, which was a large rake. Eventually, hearse came to mean the structure constructed over or around a coffin, and its modern sense, of a vehicle used during a funeral procession, pops up in the mid 17th century. The word rehearse is distantly related to hearse, for rehearse etymologically means “re-harrow”, or, metaphorically, to “go over again”.

It was not until the late 16th century that the word came to refer to practicing a play, scene or part in private before a public appearance.”

The Kilgarvan man was just starting to describe a line from A Midsummer Night’s Dream when the replacement hearse arrived from Tralee.